The Importance of Proper Bathroom Ventilation: Where Can You Vent Your Bathroom Fan?

I decided to write this quick blog after having a discussion with a fellow contractor recently in which we both disagreed where a bathroom fan could properly vent. From his experience he believed the bathroom fan could be vented into the soffit or even in some cases out of a gable wall, while I disagreed and noted that it had to be directly vented to the outdoors per the code. 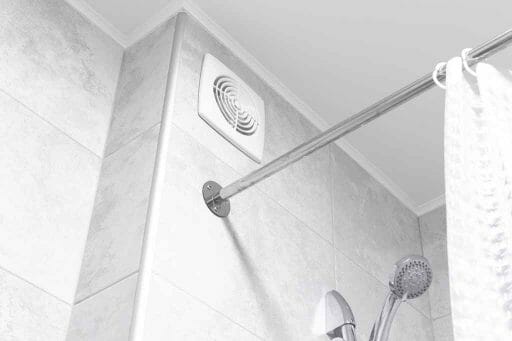 What Does the Code Say?

Since we are all human and we all make mistakes, I decided not only to pull the code book myself, but also call my local building inspector and ask him in case there were changes in the recent codes. Inevitably when he called me back, he referred me to the exact code which I had located in Chapter 15 – Exhaust Systems in the International Residential Code (IRC). Note: I am personally referencing my 2009 code book and while the codes have since been updated, this code specifically has not changed.

The inspector stated as does the code on Section M1501.1 – Outdoor Discharge Termination – “The air removed by every mechanical exhaust system shall be discharged to the outdoors. Air shall not be exhausted into an attic, soffit, ridge vent or crawl space.”

Section M1502.3 – Duct Termination – goes on to say “…Exhaust shall terminate not less than 3 feet in any direction from openings into buildings. Exhaust duct terminations shall be equipped with a backdraft damper.”

So, What Does that Mean?

In a nutshell the inspector said that a bathroom or dryer vent since both are exhausting moist air can NOT be vented into a soffit per the code. Second, doing so would also not allow the installation of a termination with a backdraft damper. Thirdly it would be within 3’ of air intake back into a building assuming they had either vented soffit or vented drip edge.

Could the bathroom vent be exhausted out of a gable wall?  The answer: it depends.  Is there a gable vent within 3 feet of where this vent will exhaust? If so, then the answer is no.

What if there is no gable vent? Technically then per the code the answer is Yes.  However, doing so would be bad practice. In the wintertime when the homeowner is taking a nice hot shower and the fan is running exhausting moist hot air out the hose and into the vent, upon entering the cold attic space and cold hose, the moisture would condense within the pipe eventually filling to some degree with water, even if it is an insulated duct.  Eventually this would leak over time causing water stains on the ceiling and the belief that there is a leak in the roof.

So, if you’re having discussions with a roofer and they are telling you that you can exhaust your bathroom fan into your attic space or the soffit itself, you now know this is incorrect and does NOT meet the current building code.  Doing so allows moist air to be sucked back into the home potentially causing mold buildup.

Why Does it Matter?

The below photo was taken on 3-2-2019 at a friend’s house in Taunton after he called me to look at a mold issue.  After inspecting it I would have to say that this is the best display of how a house can pull moist air back into the home causing mold on the plywood underlayment.  You can clearly see that the mold is the worse where the fan is exhausted into the soffit and decreases as you get further away from it. 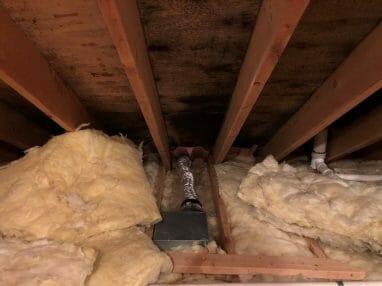 When you’re in need of roofing or home improvement work, give Beantown Home Improvements a call and get it done right the first time!